The Last Storytellers: Tales from the Heart of Morocco (Hardcover) 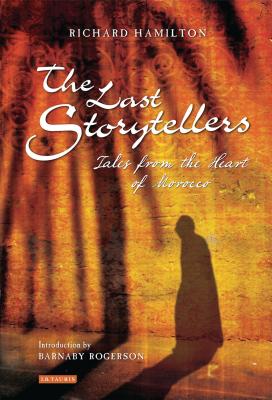 By Richard Hamilton, Barnaby Rogerson (Foreword by)
Email or call for price.
Out of Print

RICHARD HAMILTON is the author of a number of books for children, including Cal and the Amazing Anti-Gravity Machine.  He lives in England.

Barnaby Rogerson is an author and publisher. Together with his partner Rose Baring, he runs Eland Books, which specializes in keeping the classics of travel literature in print. He is the author of acclaimed biographies of the Prophet Mohammed, and the Prophet's heirs, a history of The Last Crusades and travel guides to such places as Morocco, Cyprus and Istanbul. He writes frequently for Vanity Fair, Condé Nast Traveller (UK), Harper's Bazaar and the Times Literary Supplement.

"The Last Storytellers succeeds brilliantly in delving down through the endless overlapping layers of Marrakech life, to reveal the extraordinary underbelly, an ancient cultural bedrock built on stories and story-telling.  Through a shrewd perception of a society that can seem nothing less than baffling to the Occidental mind, Richard Hamilton has triumphed where many before him have failed." -- Tahir Shah, author of The Caliph's House and In Arabian Nights

"This is a wonderfully vivid and striking collection of stories which I heartily recommend." -- Fergal Keane, special correspondent for BBC News

"Richard Hamilton has recorded something which very few foreign correspondents do and in doing so he has captured a rich, vibrant yet disappearing world. The immediate and sudden stories of political upheaval, conflict and natural disaster are what takes a foreign correspondent to postings around the world. But instead, Richard Hamilton, a modern reporter of the 24 hour news age, has chosen to focus on something very different. He has listened, learned and been captivated by the storytellers of Morroco, re-telling some of that country's charming and spellbinding traditional stories. The tales are amusing, whimsical and and leave you spellbound that you are reading stories which may soon disappear. Hamilton has paid a fine and lasting tribute to Morocco's storytellers by writing down their stories for posterity....and our enjoyment." -- Rageh Omar, television news presenter and writer