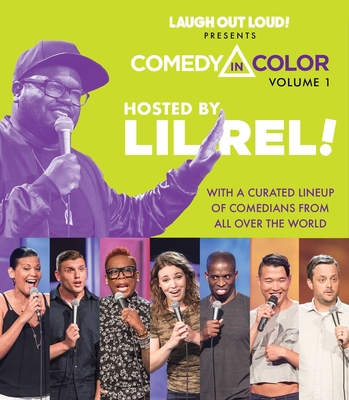 By Laugh Out Loud, Lil Rel with a curated lineup of comedians from all over the world (Read by)
$29.99
Usually Ships in 1-5 Days

A brand-new audio series collecting live recordings of the most hilarious stand-up comedy routines from Laugh Out Loud’s hit Comedy in Color franchise, which debuted on Pluto TV.

Comedy In Color, Volume 1 welcomes listeners to the largest international comedy festival on earth with curated stand-up sets from ten jam-packed shows at the world-famous Just For Laughs Comedy Festival in Montreal. Lil Rel Howery (best known for his breakout role in Jordan Peele’s Oscar–winning film, Get Out, and the Fox series, Rel) will serve as host, providing original material and personal stories from his experiences at JFL, as well as introducing our line-up of forty of the funniest comedians from Comedy In Color, including Chris Distefano, Aida Rodriguez, Vir Das, Godfrey, Ronny Chieng, and Nate Bargatze. Lil Rel’s set is also featured in Volume 1. Laugh Out Loud debuted the Comedy In Color stand-up franchise on Pluto TV earlier this year, and has already seen immense success, bolstering Laugh Out Loud as one of the top comedy channels on Pluto TV.

Laugh Out Loud is a comedy brand and multiplatform entertainment company founded by the world’s top comedian Kevin Hart. Through comedy in color, LOL unites a diverse, global audience around an essential connective tissue: LAUGHTER. From stand-up legends to the next generation of comedic talent, Hart and LOL curate comedy’s boldest voices to produce original scripted and unscripted series, stand-up specials, live broadcasts, and experiential activations. To Laugh Out Loud, Hart brings the groundbreaking social strategy that earned him 100 million+ followers, sold out 2018's biggest comedy tour in the world, and continues to break box office records. For more, visit LaughOutLoud.com.