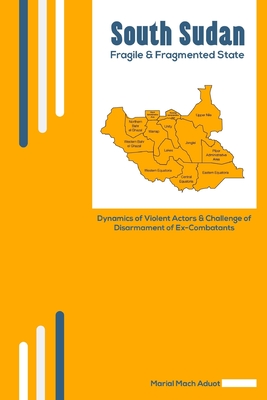 In societies with socio-political stability, state principles and authority are enduring. While stability can be misleading, the prospects for a sense of relative peace and security could countervail violence. Even with a little persuasion, law enforcement agencies can prevent casual use of force, and that is the idea of a functioning state. The functioning state is characterised by the existence of cohesive socio-political capacity and is viewed by internal and external actors as legitimate. This study argues that South Sudan emerged as a fragile and fragmented; 'a country without a state' (Johnson, 2016, p. 16). This argument emphasises how the legacies of protracted civil war, between North and Southern rebels, various violent ethno-political factionalism in South/ern Sudan, and the enactment of politico-military policies present severe challenges. In this context, it worth arguing that South Sudan faces two challenging tasks: state-building and nation-building. The domestic dimension of sovereignty is punctuated by different degrees of violence and deficiency of the state's capacities. In that case, South Sudan lacks normative conceptualisation of the state as the effective domestic extensiveness of sovereignty. This book examines the challenges of building effective state and instruments of governance in South Sudan. This emphasis explores the deficiency of the state as an organising system of public authority within a state has led to decentralisation of violence at every level of South Sudanese state. In the conceptual context, the book argues that there is a real danger of failing to rebuild the emerging state to become the ultimate authority capable of maintaining the structure of the socio-political function. The theoretical emphasis on the relationship between peace and functioning state is vested in the international relation's understanding of the state as an omnipotent actor that upholds a claim to a legitimate monopoly over the use of force in a given territory (Weber, 1946; Lake, 2008). Based on this rationale, academics like (Waltz, 1979; Keohane, 1984) defined the state as a collective unit of global politics. As they focused on state functions and their interactions, these scholars regarded the states as the fundamental instrument of power (Bull 1977; Reus‐Smit, 1999; Wendt, 1999). Sovereign states, in this context, are perceived as indispensable objects of international politics. Therefore, states stood as an essential component of both peace and violence (Wendt, 1999). Deriving from this understanding, the international community has adopted a state building approach which associated the capacity for the prevention of war with the capacity of state's institutions (Lemay-H bert, 2012). According to Copnall, (2014, p. 25), South Sudan is 'a state in search of a nation: a new country on the map populated by the people without a particularly strong common identity'. This argument implied lacks a consolidated statehood. Hence, formal institutions or structures of governance are too fragile and unable to perform political and security responsibilities associated with statehood. In this case, the authority to mobilised ethno-political armies and the use force is instead arrayed through 'a system of relations linking rules, not with the 'public' or 'even with the ruled, but with patrons, associates, clients, supporters, and rivals, who constitute the 'system' (Jackson and Rosberg, 1982, p. 19). The fragility of central authority means the South Sudanese state is unable to control the hostile behaviours of the ethno-political identities. At the opposite of sufficient sovereign authority lies limited statehood, which can manifest itself with lack the capacity to implement and enforce collective decisions, including the monopoly of the use of force.